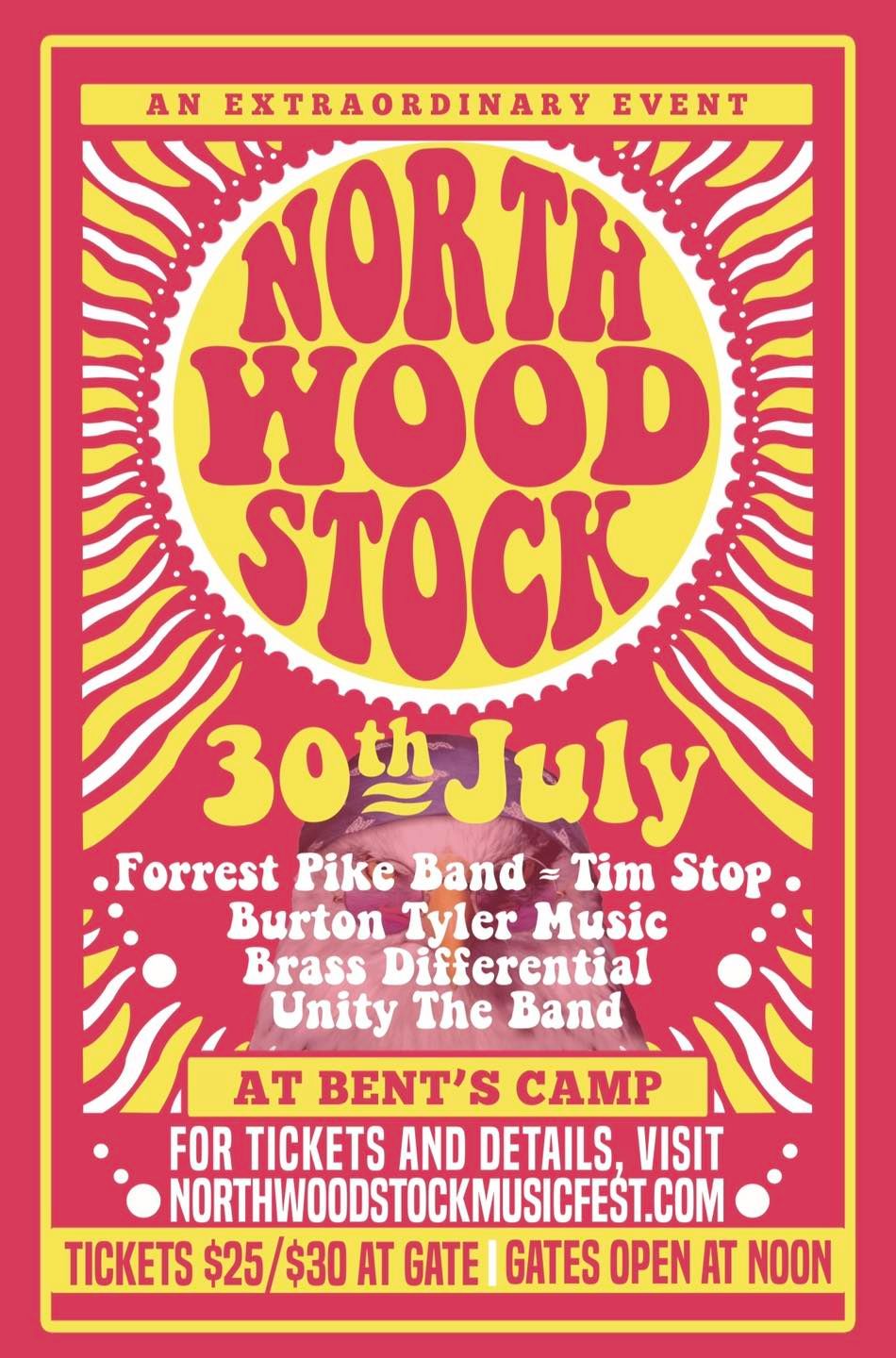 Northwoodstock Music Festival RETURNS July 30th 2022 at Bent’s Camp on Mamie Lake of the Cisco Chain. Join us for a day of Peace, Love, and Good Music as Bent’s Camp transforms into a venue from another era. With music on the lake shore on the stage, outdoor bar and grill, a beer garden and much more, we are excited to welcome our loving hippies back to Northwoodstock! Don’t forget to bring a chair.

$25 Advanced / $30 at the gate. Advanced orders save $5 vs gate price and receive souvenir event pass. All attendees will be required to wear admission wristband. Tickets are not mailed or distributed electronically. All tickets will be available at WILL CALL at the event entrance. Gates open at noon!

Forrest Pike is a Nashville Recording Artist who specializes in keeping the Country in Country Music. Forrest started playing guitar and singing in front of audiences at the young age of 8 yrs old. His early influences include Johnny Cash, Willie Nelson, Waylon Jennings, Merle Haggard, Tennessee Ernie Ford, and Chris Ledoux. His musical tastes moved towards classic rock in his teens, to include The Animals, Led Zeppelin, The Doors, Fleetwood Mac, The Moody Blues, Bob Seger, The Allman Bros. and The Marshall Tucker Band.

Tim Stop is a singer/songwriter out of Chicago, who’s recently played on several major international tours, opening for rock legends Chicago and REO Speedwagon. He’s performed to sold-out crowds at historic venues like Red Rocks and the Greek in LA, and his latest single “Perfect Fool” can be heard on SiriusXM’s “The Pulse” and has over 300,000 plays on Spotify since its release.

The Burton Tyler band is a local singer/songwriter cover band from Eagle River.

Unity The Band is an award-winning original roots reggae group based in Wisconsin. Their intense touring schedule of varied venues around the Midwest, East Coast, West Coast and Hawaii has honed an interactive outdoor stage show with positive party vibes and the knack for drawing club crowds into the irie groove. For Northwoodstock, Unity will be joined by the Rasta Horn section to round out a 12 piece band and give Bent’s Camp a show unlike any other.

Brass Differential’s sound is steeped in the New Orleans tradition and features a spicy gumbo of musical styles, including jazz, blues, funk, R&B, soul, and hip-hop, among others.  What sets Brass Differential apart, however, is its unique horn-centered sound, anchored in the low end by the sousaphone.  The group’s live experience promises to please with blistering, abundant solos and prolific attitude.