NOTE: Due to the uncertainty surrounding the current COVID-19 (coronavirus) outbreak, many of our upcoming events have been postponed or canceled. If and when these events are rescheduled, we will be here to provide you with the most up-to-date information possible. For information about a specific event, please contact the event organizer(s). Thank you! 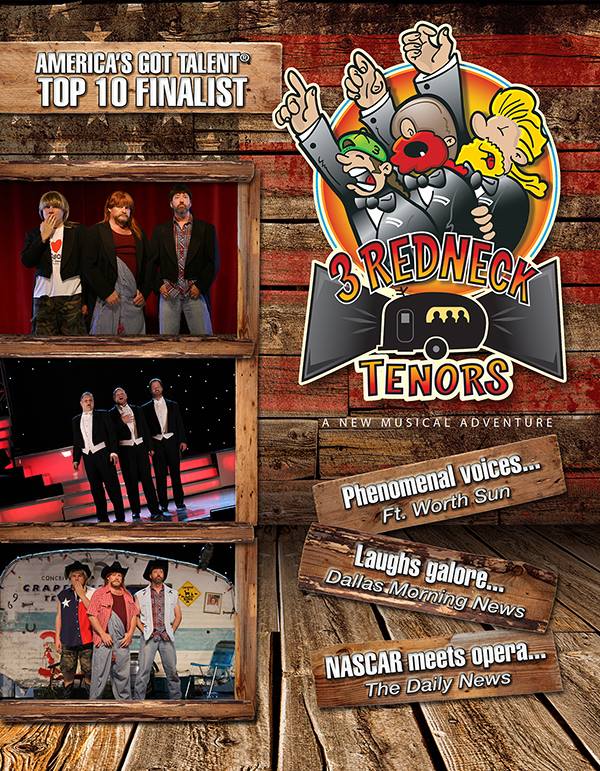 What on Earth is a redneck tenor? Someone once described them like this: If Larry the Cable Guy, Il Divo and Mrs. Doubtfire had triplets together, they would likely be the 3 Redneck Tenors.

Set to hit the stage Saturday, January 25 at the Campanile Center for the Arts, they will bring a smorgasbord of songs from all categories; gospel, country, Broadway, pop and even classical.

This “weirdly awesome blend of crooning, country and comedy” wowed judges on 2015’s “America’s Got Talent,” where they were finalists with their act “Opera in Blue Jeans & Tuxedos.”

Matthew Lord, Blake Davidson and Johnathan Frugé are classically trained vocalists who’ve been delivering down-home laughs and big city sound since 2006. This powerhouse trio will have you doubling over with laughter throughout their show.

Lord, the creator and writer for the group, has performed with almost every major opera house in the U.S., including San Francisco Opera, Lyric Opera of Chicago, Dallas Opera, Houston Opera, Washington Opera and Portland Opera. He made his New York Metropolitan Opera debut in January 2004 in “Boris Godunov.”

Davidson has sung with the Anchorage Opera, the Dallas Opera, the Fort Worth Symphony, the Florida Orchestra and the Dallas Symphony – for which he is the featured soloist on the symphony’s Christmas CD. Performances outside the country include New Zealand’s Auckland Philharmonic and the Filharmonico de Jalisco in Guadalajara, Mexico. Early in his career, Davidson was seen off-Broadway at 2nd Stage and as the ringmaster for the Shrine circus.